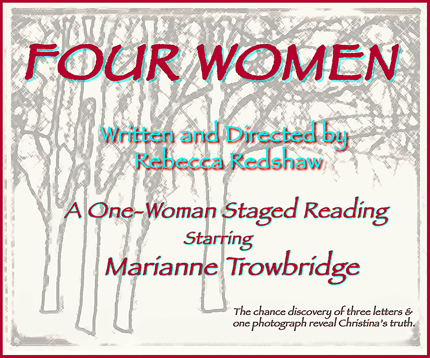 One Act – One Woman Play

At fifty-six, Christina Wells has the difficult task of placing her mother, Sheri in an Alzheimer’s home. As if that task isn’t difficult enough, as she is going through her mother’s things she finds three letters and one photograph that will change her life.

While reading the letters, Christina realizes her mother has kept a secret. During WWII, Sheri befriended two young soldiers. Christina recognized her mother and father, Marcus in the photo, but not the other soldier. On the back was printed the name “Robert Cabot.” She had few clues to go on – an old letter from a Southern girl named Bootsie had written a letter to Marcus and an unsent letter from her mother to Robert. Three letters and a photograph.

Why the lies? Who was Robert Cabot? Would her mother ever be able to tell her the truth? Who was Christina really?

To find answers, Christina wrote four letters to the four women in Robert Cabot’s life; his elderly sister, Elizabeth in New England using the address from her mother’s “un-mailed” letter, Bootsie, who still lived in Georgia, and Vera, Robert’s widow who, as she learned from Elizabeth, was several years Christina’s junior. The fourth letter, the one that offered the least hope, was to her own mother, who, even when she was of sound mind denied her daughter the truth.

FOUR WOMEN. Each holds a piece of the puzzle for a woman’s struggle for truth in life.