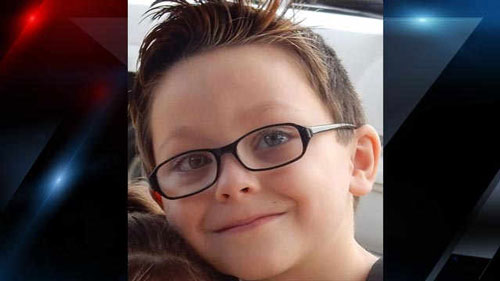 Maybe it was the striped T-shirt. Every little boy growing up has a striped T. Of course, once the teen year’s approach stripes give way to rock concert logos or nondescript hoodies.

Maybe it was the oversized glasses that he would grow into. There’s something endearing about a little boy that takes pride in seeing elusive bugs more clearly while trying to keep those lens clean while kicking up dirt on the playground.

Maybe it was his smile; pictured with his little sister, big grin, no “first grade-gap” not yet, not now, never.

Maybe because he was bursting out of the classroom door for recess. I mean, who doesn’t remember the joy of skipping on the playground even if it was only for a few minutes?

Maybe because this time he was the only one. At Sandy Hook there were so many. Children seen crying, terrified, hand in hand running from the scene.

Maybe because there was only Jacob this time, not twenty other children whose smiling school pictures were shown on television hours on end. Heartbreaking but too many to remember each name. We remember the place – Newtown – but an unbelievable number of innocents.

His name was Jacob, Jacob Hall. Just a six-year-old kid who bled out a few days later. Shot by another kid whose name the media has decided not to name. So many lives ruined, for what?

Maybe it’s not okay that we kill kids. This is America, right? When does the owning of guns supersede kids’ playtime?

Maybe it’s not okay that elementary schools now have a plan and practice what to do when there’s an active shooter approaching.

Maybe it’s not okay that it’s almost a weekly occurrence that some innocent is cut down before his or her birthday cake has candles in the double digits as someone fires off multiple lethal rounds in seconds.

Maybe it’s not okay to be shouting to the rooftops the righteousness of the 2nd amendment when “Life, Liberty, and the Pursuit of Happiness” is snuffed out for a kid whose biggest challenge in life was which super hero he would be for Halloween. (Jacob opted for Batman).

Maybe we need to rethink our priorities?

Maybe the word RESPONSIBILITY needs to be added to every newscast, every obituary.

Maybe the owner of a gun should be responsible for crimes committed with that gun? If your car is in an accident, even if you’re not driving, you’re responsible.

Maybe stores like Walmart and Big 5 and the friendly neighborhood gun shop need to take responsibility for contributing, not to sport, but to mayhem.

Maybe all the lawmakers who do nothing even though people who vote for them say “this has gone on far too long”, maybe they should have to look at the crime scene photos and the autopsy images that show faces gone, bones shattered, blood soaked bodies of children ravaged because of proclaimed ideology that is reduced to sales and profits.

Maybe someone will listen.

Maybe because Jacob’s mother asked that those attending – pall bearers, friends, and strangers devastated by tragedy in their backyard – asked them to come dressed as Super Heroes so the little children wouldn’t be afraid.

Maybe we all need to act. Our children are dying.

Maybe someone will act responsibly.

Maybe that someone is us.