Barbara Stanwyck shows a pair of gams that never saw the light of day on Big Valley.

I’m tellin’ ya right up front I liked this movie. I didn’t know I would, didn’t think about it much. It’s just the way things happen sometimes. 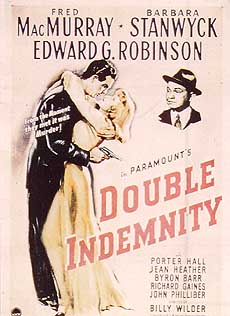 My take on Fred MacMurray is of a too tall guy with a pipe and a house full of kids in khaki pants. But he shows up on screen as Walter Neff, an average Joe who sees a chance to score, and score big, both with a dame and a wad of cash. Neither of those two things comes his way very often. When he sees his shot, this insurance salesman with a smooth pitch decides to grab a little more than his fair share.

Barbara Stanwyck shows a pair of gams that never saw the light of day on Big Valley. Her clipped delivery and constant eye contact with Neff entrances him from the get go. The ankle bracelet doesn’t hurt her cause either.

Also tied up in this neat package of story telling is Edward G. Robinson. He’s a hard working claims adjuster whose job it is to protect the insurance company from hustlers and con artists. He’s a smart cookie, too smart for Neff and his dame who come within inches of committing the perfect crime.

All right, I’ll confess. I’m a sucker for a movie with a script. Billy Wilder, along with Raymond Chandler, doesn’t mince words telling a story. Wilder knows how to direct a movie, too, all kinds of movies: Some Like it Hot, The Apartment, Witness for the Prosecution, Sunset Blvd., The Seven Year Itch. You get the picture.

No matter that this classic is filmed in black and white. Actually, that’s a plus. My bet is film noir can take partial credit for the surge in cigarette smoking in the forties. The smoke looks so cool in black in white.

That about wraps it up for me. Rent Double Indemnity. It’s no skin off my nose if you don’t. Your loss.