A Rumor of Angels

PICTURE THIS! “A Rumor of Angels”

If you saw “The Rumor of Angels” on the big screen you were one of the few. This gem of a story almost jumped off the video shelf when I read the credits. How could a movie starring Vanessa Redgrave, Ray Liotta, and Catherine McCormack be missed? 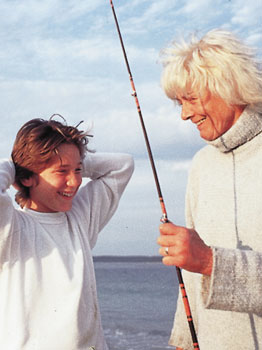 It shouldn’t. Director Peter O’Fallon found a turn of the century book by Grace Duffie Boylan titled “The Son Liveth-Messages from a Soldier to His Mother,” renamed it “A Rumor of Angels,” told the cinematographer to point the camera at Redgrave and yelled “Action!”

Of course, the process could hardly have been that simple. The script was believably updated to present times. The location, Canada’s beckoning coastline, was as vital to telling the story as the words on the page.

O’Fallon, whose director chops up until this time were honed in television, framed his storytelling with lots of close-ups on Redgrave’s face.

Good choice. As the eccentric Maddy Bennett, Redgrave rarely bothers with a comb or a bra or make-up and looks stunning. Blue eyes that match her oversized blue turtleneck and wrinkles that signal a life well lived, Maddy befriends James, a twelve-year-old kid who’s a little lost and more than a little lonely.

Trevor Morgan, as James, manages to create a pre-teen that is neither obnoxious nor precocious. He’s just a kid whose father, played by Ray Liotta (Dominick and Eugene) and stepmother, Catherine McCormack (Dangerous Beauty) don’t have a clue as to what the boy is going through emotionally.

Maddy doesn’t either but she takes the time to find out. Between riding bikes to a forbidden site, painting a fence to a Mozart symphony and tapping out Morse code messages she helps James understand emotions buried deep in his heart.Oh, that we should all find a Bohemian Auntie Mame like Maddy to open our eyes to the wonders of not only this world, but the next.