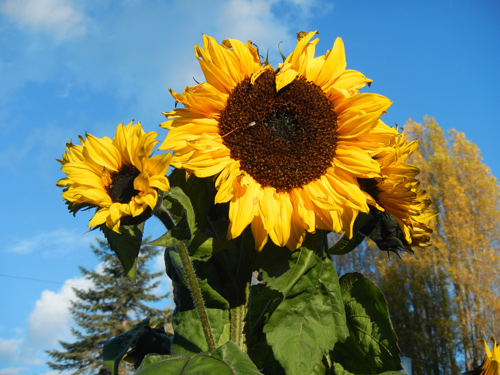 VOLUNTEER [noun] a person who does something, especially helping other people, willingly and without being forced or paid to do it.  Definition in the Cambridge English Dictionary

Funny, I always think of “volunteer” as a verb, not a noun, but of course it’s both. Being involved over the years has made the biggest difference in my life and I’m always surprised that, given the personal benefits derived from volunteering, more people don’t “get involved.”

My dad was a working man with a wife and four kids. Owning his own store was a time-consuming passion that left little extra time outside of work, church, and family obligations. He didn’t play golf or tennis or belong to a “club.” He would come home from work, take his suit coat off, and cut the grass in his dress shirt. Now that I think back I realize it had little to do with vanity and far more to do with getting the job done before the sun set. He was in his 80’s when he met and married Helen and they lived together in Assisted Living.

Helen had played piano for years and committed most of their generations favorite songs to memory. My father loved to sing, so when Helen suggested they walk down the hall to the Memory Loss unit at lunchtime, he reluctantly went along. I’ll never forget the joy in his voice when he called me later that afternoon. “We sang for over an hour and they remembered all the old lyrics and sang along! The nurse told me as we were leaving that one woman hadn’t spoken in years and for the first time today she sang along. What an amazing feeling!”

My mother was extremely shy, seldom leaving the house except for church or in the company of my father, but somehow, she got involved volunteering for “special” classes being offered for severely handicapped children.

Mom came home one day and said she had helped a young boy crawl for the first time. She moved his hands, while another volunteer moved his feet as they all inched their way across the mat. She didn’t complain about the pain in her arthritic hands when the little boy squeezed too tightly, thrilled to be moving forward.

My own involvement in volunteering has been varied depending on where I was in my career. As a first-year music teacher, my weekly schedule had only two half hour breaks during the week.

Ronnie was in second grade and a mixed-race kid in a very white school and really struggling trying to harness his energy toward learning. I talked with the principal and arranged to spend a half hour a week one on one with Ronny. I brought a pair of drum sticks to the first meeting and his eyes lit up! I doubt he’s a professional drummer but for that half hour once a week, he was focused and happy playing along with the music.

Over the years, I’ve looked for opportunities (outside of my employment) to be involved.

While working at a major recording studio in Hollywood, I negotiated time during the week to attend hospice training at Cedar-Sinai Hospital in Beverly Hills. This was before the AIDS epidemic hit and hospice was a new concept. Over the next three years I met six patients (one at a time) who were aware they were losing their battle with cancer. I attended staff meetings once a week during my lunch hour and spent time with the families in the evenings.

David was my first patient. He and his wife, Helen were survivors of the Holocaust and after all they had been through, he was now resigned to dying within six months. When I visited him in hospital, I asked what gave him pleasure. “Playing Gin Rummy.” My next visit I brought a deck of cards. I learned just because you’re dying doesn’t mean you can’t enjoy a favorite pastime.

After three years I needed a break from death and volunteered at a battered women’s shelter. The residence was at a secret location near Santa Monica. After an intense orientation, I assisted in support groups on Saturday mornings along with a social worker. Los Angeles is populated by millions of people and after a year at Sojourn, I started a battered woman support group just for lesbians. The groups were between four and eight women, but the meeting offered a safe place for two hours each week.

Occasionally, the shelter was given free tickets to a concert or an event. I was driving an Isuzu Trooper at the time and offered to drive two mothers with their children to the circus. (One had fled for her life from a man who threatened to kill her if he ever found her. The other woman left her home with nothing but her kids and the clothes on her back.) Sitting with the group of about twenty women out for a safe and fun evening with their kids was the best. When the acrobats flipped and flew through the air, I told the ladies “I used to do that!” Their eyes got huge for just a moment before they realized I was kidding. Joy and laughter followed.

As a writer, literacy has always been dear to my heart. I can’t imagine not being able to read. Twice in my life I got involved with two very different literacy programs. While living in Port Angeles I served on the Clallam County Literacy Council for six years, three as the Chairperson. We started a “Basket of Books” program where the CCLC placed children’s books in a basket in doctors’ offices and restaurants and just about anywhere we could think of where kids had to wait. Years prior to then, Chatham College in Pittsburgh advertised for tutors to help one on one with adults wanting to learn.

Her name was Hannah and she was ninety-five years old. She had been born in the South and her granddaughter drove her to the campus library where we met for an hour for several weeks. It was about the time that “Having Our Say” was published, the memories of the Delany Sisters, each a hundred+ years’ old. I read a few pages to Hannah and then she’d tell me a bit about her life. We worked on learning letters, but our time together was short. I loved the fact that she wanted to learn.

Over the years I’ve been invited to sit on various boards, but my patience usually wears thin after a year and I resign. I know boards make important policy decisions, but I find being “hands on” or “in the trenches” far more rewarding. As should be apparent by now, my life has been far more enriched by meeting people in a volunteer capacity than any way I may have contributed.

Which leads me to my latest effort. I just finished training as a CASA (Court Appointed Special Advocate). My answer during the interview could have been given at any one of the past volunteer roles mentioned. “Why are you here? Do you have a history with the Foster system or difficult homelife?”

My answer was, and is, the same for any volunteer opportunity I’ve been involved with.

“I have been fortunate.”

My parents were loving. I remember seeing them kiss each other hello and good-by every day. We ate dinner together and they asked each of us what we’d learned in school.

My career has been varied and fascinating and I continue to work at my craft. I’ve had more intimate adult relationships than some, but most have been reasonable and run their natural course. I was hit once and ended that affair immediately.

As a self-proclaimed agnostic, I am somewhat surprised to still state my core belief is the Golden Rule – “Do unto others as you would have them do unto you.”

Lucky? You bet! I am aware not everyone is dealt the same hand in life. Maybe that’s why I volunteer.