The Last King of Scotland

The Last King of Scotland

Without all the well-deserved accolades for Forest Whitaker, The Last King of Scotland may have disappeared from most movie screens in a flash. Finally, a worthwhile reason for awards. 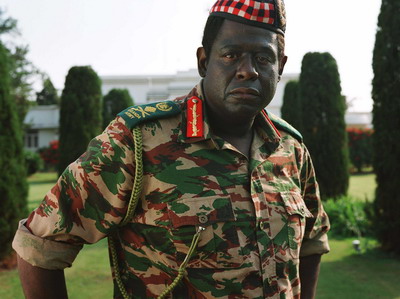 It’s a difficult task to take a brutal dictator and make him appealing, yet director Kevin Macdonald was more than up to the task. It makes sense that there must be something very charismatic about a man like Idi Amin who can win the support and affection of the masses. What’s difficult to resolve is the appeal one feels for this despicable dictator as portrayed by Whitaker.

In this fictional tale, Nicholas Garrigan (James McAvoy) is a naïve young doctor who can’t wait to escape his parents’ household in Scotland. On a whim he goes to Uganda to practice medicine. All goes well until a series of coincidences with Amin endears him to the tyrant and he becomes Amin’s personal physician and confidant.

Before Last King of Scotland, Macdonald’s forte had been in documentaries, One Day in September (about the Munich Olympic attack) and Touching the Void (a mountaineering adventure), both worth renting on DVD. He has handled the leap to docu-drama very well. 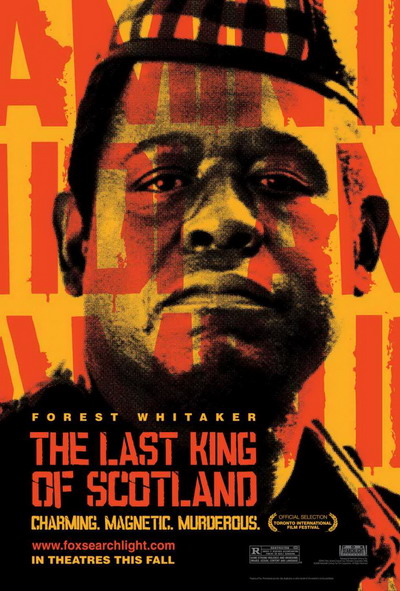 Cinematographer Anthony Dod Mantle filmed Last King…in 16mm, a film format that has all but disappeared with the advent of digital video. Subsequently, the look of the film is grainy with a “news clip” feel, making the footage seem all that more real. Alex Heffes’ musical score compliments the mood swings of the movie with subtlety, transporting the audience to Africa without relying on stereotypical themes.

Almost unnoticed in the huge shadow of Whitaker’s Amin is McAvoy’s Garrigan. An actor with considerable charisma, his character runs the gamut of emotions and he experiences a lifetime of adventures while in the company of Amin. The supporting cast is large and to a person brings believability to the screen.

Forest Whitaker’s first screen role was twenty-five years ago and he’s come a long way since Fast Times at Ridgemont High. It seems only fitting that he be lauded as The Last King of Scotland.