Boys Will Be Girls

Boys Will Be Girls — The Spirit of ESPRIT

[Only transgendered men in various stages of living their feminine side were interviewed for this article. For purpose of clarification, they will be referred to using feminine pronouns.]

It may be raining men in many parts of the Pacific Northwest but in the small, working class town of Port Angeles, Washington the sun is shining on the “women” of ESPRIT. Celebrating its fifteenth year, this annual transgender conference attracts people from as far away as New Zealand and England. 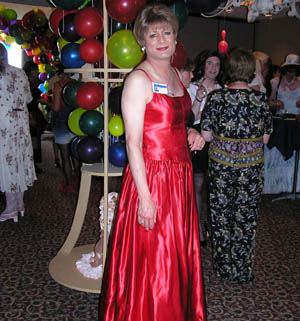 Participants have booked the waterside Red Lion Inn to capacity during the seven day event. Activities range in scope from typical tourist fare (a shopping trip to Victoria, Canada – a scenic drive to the snowcapped mountains of Hurricane Ridge) to medical seminars chaired by experts in the field (Genital Reassignment Surgery – Legal Issues – A Practical Approach to Personal Safety for the TG Community) to practical, but fun, lectures (Crossdressing 101 – The Amazing World of Airbrush Makeup).

Night time activities scream for formal finery at the mid-week Dysfunctional Southern Family Reunion and letting your hair down (or up, depending on your sense of style) at the Friday night Talent Show and Dance.

Camaraderie and friendship are important at any gathering as well as the ability to share unique information. ESPRIT is no different. But what is essential to newcomers and returnees alike is the freedom to feel. Laura is attending ESPRIT for the second year in a row. Formerly married with children, she was a sheriff prior to being outed. She described the conference.

“The wonderful thing about ESPRIT that really hits you is that feeling of sisterhood. Women have that. They’re connected to each other. A lot of trans people don’t have that until they come here. Then it’s like a pilot light – once that’s lit, it’s like the gas burners are opened. You’re connected to people.”

The transgendered community, which is an umbrella term covering anyone in conflict with his/her gender, is represented at ESPRIT by crossdressers, transvestites, and transsexuals in various stages of transition – hormonally and surgically. 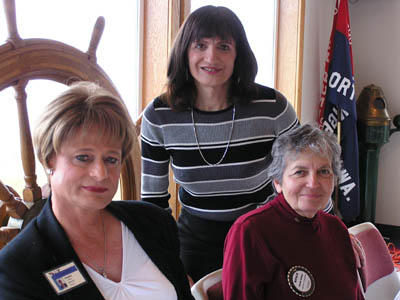 “Sexuality is more who you like to go to bed with and gender is who you are inside – your core. [They are] …two different things,” Laura said. “Because they both have to do with the crotch, people get them mixed up, but there’s definitely a distinction that needs to be made.”

Many of the participants have established themselves professionally and financially. A large percentage of those in attendance have advanced degrees. There are doctors, police officers, and lawyers here. After twenty years of marriage, two children, and five grandchildren, Victoria decided it was time to be true to her self. Coming from a small town, she relies on the Internet for information and as a way to meet people. ESPRIT opens other avenues.

“I’ve been studying it online and reading books, so I thought I’d come here and attend classes and seminars and learn more,” Victoria said. “I live in a small town and have gone out a few times at home but most of the time I get odd looks. A couple of times a guys came up to me and gave me a hard time. I thought there was gonna be a fight, but I talked my way out of it.”

Victoria spent six years in the Navy in Viet Nam, a lifetime ago. “I’m totally non-violent. I gave that up after Viet Nam. The war changed my mind about a lot of things. I don’t even go hunting anymore.”

Forty year old Julia is catching a few rays on the steps outside of registration. She first attended ESPRIT in 2002 and this year, along with two friends from home, plans to vacation in the states after the conference. A native New Zealander, she has a different perspective on acceptance.

“New Zealand doesn’t have any issues with transgendered folks. You still get the odd person, but you can educate them. I feel comfortable going out.” 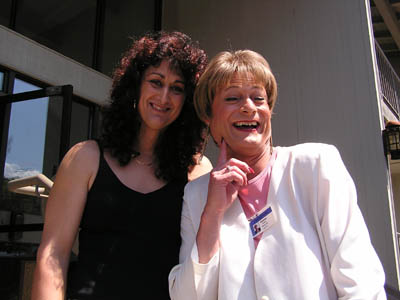 Julia’s parents are unhappy with the idea of her crossdressing, so she hasn’t broached her future medical plans with them. She has used the Internet as well, for medical research and she’s contemplating surgery someday, probably in Thailand.
“It’s not an easy road by any means – one thing at a time and then move on,” Julia said. “Over the years everything comes into place. Back home you think you’re the only person in the world because there’s so few of us.”

Not everyone at ESPRIT is single. A number of the attendees are heterosexual with families. Some travel without their wives but others bring spouses. It’s one thing to have an epiphany concerning your own gender identity, it’s quite another for a partner to evolve with the revelation. A number of sessions at ESPRIT are designed to help the significant other in a trans relationship understand and accept what is transpiring.

Betty and Faith have been married for eighteen years. Faith had buried her feelings her whole life but now considers herself a transsexual.

“I’ll probably go into transgender. I don’t know if I’m going to have surgery. I started hormones about a month ago and I’ve transitioned at work from male to female. I’m a bill collector for the power company, but I haven’t had any problems. They [customers] look at me and take a couple of takes but then realize I’m there on business.”

An attractive couple that looks somewhat alike, Betty and Faith rely a great deal on the support group that meets weekly in their hometown. Membership in the group is near forty compared to the ten or fifteen people ten years ago. But small town living can be difficult and they’ve have experienced mixed reactions where they live. 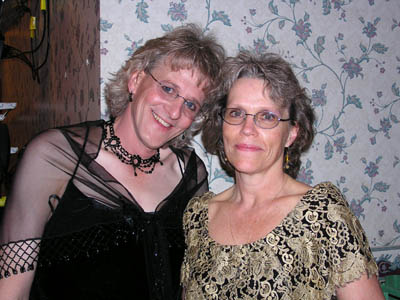 Betty said, “They’re kind of quiet in the town but it’s better than running us out on a train bed or something. You keep some friends and lose some.”

“Our family is in various phases of acceptance,” Faith adds. “They all know how serious I am and how Betty and I are committed to each other. They know if they want to see us, they need to come along.”

The restaurants and shop owners of Port Angeles have welcomed the ESPRIT convention for years for obvious reasons – they spend a lot of money dining and shopping. But that hardly defines the feelings of the community. ESPRIT representatives are anxious to speak to various service organizations and this year were well received by the Rotary at their weekly luncheon. A panel of transgendered folks enjoyed a lively return engagement to Peninsula College answering questions from students curious about a world far different than English Literature or Computer Science.

Reflecting on the community atmosphere in Port Angeles to ESPRIT, Faith stated the general consensus of those in attendance. “We would like to take this city and run it through a XEROX machine and just plant it all across the country. They have been so wonderful.”